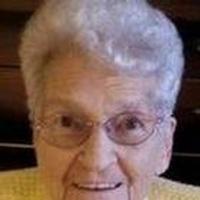 Violet Guthrie, 90, of Canadian, died July 20, 2016 in Borger. She was met in heaven by her Savior and many loved ones. Services will be at 2:00 PM Friday, July 22, 2016, at First Baptist Church in Canadian, with Rev. Matthew McCurley, pastor, and Rev. Jim Goes, pastor of Calvary Baptist Church of Borger, officiating. Burial will follow at Edith Ford Cemetery under the direction of Carmichael-Whatley Funeral Directors of Canadian. Violet was born April 29, 1926 in Bozeat, England. She married Frank Guthrie in Bozeat towards the end of World War II, and moved to Canadian. They were married for 66 years. Violet was a long time member of First Baptist Church in Canadian. She was a homemaker and mother, and enjoyed living in Canadian, but often talked about England. Violet enjoyed gardening, cooking, knitting, painting and taking care of her family. She was preceded in death by her husband, Frank Guthrie of Canadian; a daughter, Janice Goodner of Amarillo; two sisters, Thora Stuart of Earls Barton, England, and Coral Ingram of Bozeat; two brothers, Richard Hewlett of Rushden, England, and David Hewlett of Bozeat; and one great grandson, Duncan Johnson. Survivors include one daughter, Thoral Johnson and husband Bobby of Borger; one son, Richard Guthrie of Abilene; four grandchildren, ten great grandchildren, and one great great grandson.
To order memorial trees or send flowers to the family in memory of Violet Guthrie, please visit our flower store.