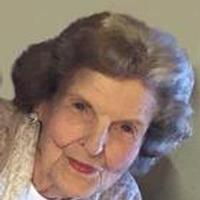 Martha Ann Price Smith, 95, of Higgins, died August 31, 2016 in Canadian. Graveside services will be 11:00 AM Saturday, September 3, 2016, at Higgins Cemetery, memorial services will be at 1:00 PM at the First United Methodist Church in Higgins, with Rev. Blake Durham, pastor, officiating. Arrangements are under the direction of Carmichael-Whatley Funeral Directors of Canadian. Mrs. Smith was born on White Deer Creek in Hutchinson County to Margaret and Willis Price on May 28, 1921. She graduated from Pampa High School and Texas Technological College. At Tech, she met the love of her life and devoted partner of 71 years Vester Smith. In 1950 they moved to Higgins with their three children where they quickly became involved in the Higgins Methodist Church and the community of Higgins. Martha’s passion was her family, and she had a special gift of hospitality. She welcomed her family at holidays with each person’s favorite culinary dish--from cherry pie and “Smith cookies” to frozen fruit salad and ice cream with creme de menthe--and always had an ample supply of Crispix mix cooked to perfection. Martha was an active member of Higgins First United Methodist Church serving on numerous committees, actively involved in United Methodist Women, supporting Methodist Youth and overseeing the Memorial Fund for over fifty years. She supported Vester’s service in Kairos Prison Ministry by preparing food and baking hundreds of dozens of cookies. Martha was named “Mother of the Year” by the Top of Texas District of Texas Federated Women’s Clubs in 1966. She later served as president of the Top of Texas District using as her motto “Bloom where you are planted”; she truly left a garden of glorious flowers. She was instrumental in the merger of Girlstown, U. S. A. with Cal Farley’s Boys Ranch which she considered one of her proudest accomplishments. On the wall of her home hung the saying, “When life gives you lemons, make lemonade.” All who knew her would agree that she served lemonade well! She will be remembered as a gracious lady, loving wife, mother, grandmother and great grandmother and has left a legacy of love, kindness, loyalty and honor. Martha was preceded in death by her beloved husband Vester, her parents; her sisters, Mary Price Patterson and Harriet Faudree Dublin of Midland; and her brother, Willis D. Price, Jr. of Pampa. She is survived by her sons, Willis Smith and wife Joanie of Higgins, and Steve Smith and wife Janice of Chickasha, OK; and her daughter, Kay Guleke and husband Jim of Austin. She is also survived by her beloved grandchildren and great grandchildren who affectionately called her “Mom”: Leslee Holliday and husband Matt, and their children Jackson, Ethan, Gracyn and Reed; Stephanie Brownback and husband Cody and their children Ella and Crew; Matt Smith and wife Kimberly, and their children Aven, Sutton and Levi; Martha Hansen and her husband Brendan, their daughters Charlotte and Annie; Cole Smith and his wife Miquela; Zac Smith and his wife Naomi; Elizabeth Newsom and her husband BK; Margaret Galton and her husband Noah; and James Guleke. Other survivors are her sister, Margaret Price Cowden of Midland; sister-in-law, Ida Ruth Price of Pampa; and numerous nieces and nephews. The family would like to express their heartfelt gratitude to Dr. Cody Culwell, the nurses and staff of Hemphill County Hospital for their compassionate and loving care. Memorials may be made to Hemphill County Hospice, 1020 S. 4th Street, Canadian, Texas 79014; or Higgins United Methodist Church Helping Hand Fund, 220 N. Main, Higgins, Texas 79046.
To order memorial trees or send flowers to the family in memory of Martha Ann Price Smith, please visit our flower store.