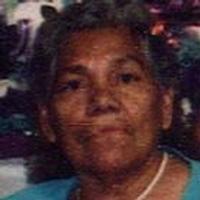 Virginia Capetillo, 80, of Canadian, died October 27, 2016 in Canadian. Graveside services will be 10:00 AM Wednesday, November 2, 2016, at Pantoñ Municipal Cemetery in San Carlos, Mexico. Local arrangements are under the direction of Carmichael-Whatley Funeral Directors of Canadian. Mrs. Capetillo was born March 20, 1936 in San Fernando, Mexico. She married Antonio Capetillo on April 25, 1955 in San Carlos, Mexico. He preceded her in death on April 15, 2006. Virginia had been a resident of Canadian since 1991. She was dedicated to her children and grandchildren, and she loved to garden, especially roses. Survivors include two sons, Antonio Capetillo, Jr., and Eduardo Capetillo, both of Canadian; five daughters, Antonia Sanchez and husband Canuto, Rosario Ochoa and husband Eddie, and Alicia Capetillo, all of Canadian, Olga Martinez of Snyder, and Asusena Bingham and husband Lyle of Gresham, Oregon; several brothers and sisters, several grandchildren, including Rodolfo Sias, Sebastian Capetillo, Gaby Flores and Esmeralda Shields; several great grandchildren and great-great grandchildren. She was also preceded in death by two daughters, Virginia Capetillo and Olivia Capetillo. Memorials may be made to the Hemphill County Hospice, 1020 S. 4th Street, Canadian, Texas 79014.
To order memorial trees or send flowers to the family in memory of Virginia Capetillo, please visit our flower store.