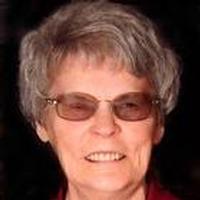 Mildred “Granny” Good, 95, of Perryton, passed away on Friday, January 20, 2017 in Perryton. Services will be 10:00 AM Monday, January 23, 2017 at First Baptist Church in Perryton with Rev. Richard Laverty, Pastor Tim Ramsey and Keith Good, officiating. Burial will follow in Ochiltree Cemetery under the direction of Carmichael-Whatley Funeral Directors of Pampa. Mildred was born April 13, 1921 in Kim, Colorado. She graduated from Kim High School and attended Hesston Bible College in Hesston, Kansas. She married Warren Good on February 1, 1946 in Canadian. He preceded her in death in 1981. Mildred lived in Canadian, Gruver, and had been a resident of Perryton for the past 30 years. While she lived in Canadian, she worked for Dr. Morris and Dr. Schneider, and later helped run Good Furniture Company in Perryton. Mildred was very active in the Notla Community Church in the 1950’s and 1960’s. When she moved to Perryton, Mildred began working at JoAnn’s Bar-B-Que, baking pies and helping her daughter run the restaurant. After she retired, she made her home in the Seasons Assisted Living where she made many friends over the years. She was a current member of First Baptist Church in Perryton. She loved playing bridge, dominoes, and most of all spending time with her family. Survivors include her daughter, JoAnn McCoy and husband Robert of Perryton; a son, Gary Good and wife Tina of Livingston; two sisters, Dorothy Panter of Denver, Colorado, and Jessie Lowrey and husband Jerry of Pueblo, Colorado; a brother, Bobby Wright; 9 grandchildren, Cammie Anthony and husband Allen of Thomasville, Georgia, Kerri Lane of Perryton, Scott Pingel and wife Tracy of Austin, Brad Pingel and wife Suzanne of Pampa, Justin Berry and wife Emma of Tomball, Serene Good of Lindale, Tiffany Willis and Randy Cain, both of Amarillo, and James Willis of Gruver; 16 great grandchildren and 5 great-great grandchildren. Mildred was preceded in death by a daughter, Linda Sue Lane; two sisters, Edith Anderson and Juanita Freiberg; a brother, Ed Wright; two stepsisters, Edna Rodman and May Dixon; and a stepbrother, George “Buddy” Wright. Memorials may be made to St. Jude Children’s Research Hospital, 262 Danny Thomas Place, Memphis, Tennessee 38105 Mildred will be available for viewing at Boxwell Brothers Funeral Home in Perryton.
To order memorial trees or send flowers to the family in memory of Mildred "Granny" Good, please visit our flower store.