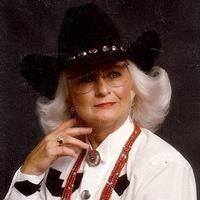 Lynetta Kay Crenshaw Gorden, 74, of Melrose, New Mexico, passed away June 15, 2017 in Canadian, Texas. Services will be 2:00 PM, Saturday June 17, 2017 at The River Ministries in Canadian, with Pastor Donald Hill officiating. Cremation and arrangements are under the direction of Carmichael-Whatley Funeral Directors of Canadian. Lynetta was born to Frank and Mattie (Grimlan) Crenshaw on February 18, 1943 in Clovis, New Mexico, and was raised on the family ranch northwest of Melrose, New Mexico, where she has lived for the past 21 years. She graduated from Melrose High School in 1961. She was the 1959 Curry County Fair Queen, 1960 New Mexico High School Rodeo Queen, & 1st Runner-Up National High School Rodeo Queen, 1960 New Mexico State Fair Queen, 1960 Curry County Fair Queen, 1960 Miss Rodeo New Mexico, 1961 1st Runner-up Miss Rodeo American and Horsemanship winner. These accomplishments lead to her organization and involvement with Horsemanship and Queen Clinics across the states of New Mexico and Texas. Lynetta served on the Board of Directors for the Miss Rodeo New Mexico and Miss Rodeo Texas pageants as well as a Director for the Miss Rodeo American pageant, serving as chairman of the Horsemanship Committee in the 1970’s. She worked for the American Quarter Horse Association during the late 1970’s in the show records and youth security departments. She moved to Canadian in 1980 and worked for Fiel Oil and Cantrell Oil. She was instrumental in the formation of the YL Cowboy Camp meeting in Canadian. Lynetta moved to Amarillo in 1986 and married Jacky Gorden. She worked for Luskey’s Western Wear as the manager of the ladies department. In 1995, she and Jacky moved back to the Crenshaw family ranch in Melrose where she continued the family ranching business. Lynetta was preceded in death by her parents, her brother Don Crenshaw, and a nephew Stanley Crenshaw. Survivors include her husband Jacky Gorden; one daughter, Tana Davis Thompson and husband Dean of Canadian, Texas; granddaughter, Lacie Thompson Franks and husband Joe of Shamrock, Texas; grandson, Taylor Thompson of Canadian; two step daughters, LaDonna Adkins and husband Kelly of Canyon, Texas, and Janet Guthrie and husband Lynn of Canadian; four step grandchildren, Nicole, Destry, and Vanessa Guthrie, and Annie Adkins; a special aunt, Jo Del Connor of Artesia, New Mexico; and several cousins, nieces and a nephew. The family requests memorials be given to the Hemphill County Hospice, 1020 S. 4th Street, Canadian, Texas 79014; or The River Ministries, PO Box 956, Canadian, Texas, 79014.
To order memorial trees or send flowers to the family in memory of Lynetta Kay Crenshaw Gorden, please visit our flower store.