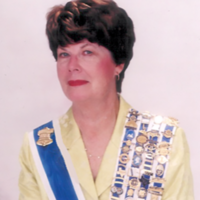 Al’Louise Suthers Ramp, of Canadian, died on Monday, Aug. 23, 2021. Memorial Services will be 2:00 pm, Friday, September 3, 2021, at the First Presbyterian Church with Rev Kyle Segars, officiating.  Arrangements and cremation are under the direction of Carmichael-Whatley Funeral Directors of Canadian.

Al’Louise Suthers Ramp was an independent businesswoman, ranch owner, national leader for the Daughters of American Revolution, historian and genealogist, civic volunteer serving on countless boards, world traveler, a lady, a mother, a wife, a friend, and so much more.

Born in Shattuck, Oklahoma, to Gwendoline Lenoir Robinson and William Heward Suthers on June 26, 1940, Al’Louise was the second oldest of five children.  Life growing up on the Suthers farm in rural western Oklahoma was hard work, fun, and full of sacrifices made in order to succeed. In Arnett High School, Al’Louise played the flute and excelled in band, then majored in business at Oklahoma State. After graduating, she met John Dale Ramp at the well-attended dance one summer Saturday night. She married him in 1962 at the First Methodist Church in Arnett. By 1964, John had a coaching job in Canadian, and they moved home, becoming active in the Presbyterian Church and the community. They bought a small house for their growing family beside Ben and Nancy Ezzell’s family home, across from the old hospital on the corner of Purcell and Cheyenne.

John retired from coaching, and they moved home to the Ramp Ranch, southeast of Canadian, where they lived all their lives. Upon moving to the country in 1968, she immediately became active in the Gem City Community, helping John, playing bridge, and raising kids. She joined the Tri-C club, which met at the Blue Ridge School House near their home. Water-skiing on small Oklahoma lakes nearby was an every-Sunday event in the summer for them and their neighbors during this time in the early ‘70s. Al’Louise developed her signature slalom dismount from the boat John was driving by releasing the rope and gliding gracefully to the bank, most of the time stepping deftly out of her skis. It was the beginning of fulfilling a lifetime goal of keeping her hair always looking good. This was accomplished with the help of the second-most meaningful relationship of her life, her hair stylist, Fay Word, a lifelong-friend, confidante, and later her travel partner.

It was during this time in the 1970s that Al’Louise began her lifelong passion of patriotism, genealogy, and service, joining the Daughters of the American Revolution as a junior member. She was the organizing regent of the local Comancheria chapter of the DAR in 1973—the name a nod to the ancient Comanche homeland in which they lived. Al’Louise held many offices and chaired many committees in the DAR, the Daughters of the Republic of Texas, Colonial Dames, the Huganot Society, and others. She would go on to serve as Texas DAR state regent from 2000-2003, and National Society SDAR corresponding secretary general and several other national offices from 2005-2008. She traveled and worked in Washington, D.C. regularly, and accepted invitations around the country to preach the gospel of patriotism and service in every corner of the nation. Her proudest moments were those honoring the military service of both the living, and the dead.

In the 1980s, the Ramps bought a house in Canadian so their daughters could more easily participate in school activities. At that time, she began working in town—first for a local law firm, then at the First State Bank—making an impact on all who knew her. This move to town temporarily interrupted her lifelong relationship with the local Texas DPS troopers patrolling SH 33; they all knew she had her “right to carry,” which she proudly told them before asked. She and her friend and business partner, Jean Schoenhals, began a lifetime of work to catalog all Hemphill County records, when they opened Hemphill County Abstract in 1997. Their fastidious fact-checking created near-flawless records of Hemphill County history, which was their goal. Al’Louise was recognized as Woman of the Year by the Canadian Chamber of Commerce in 1987.

She and Fay Word traveled together after her retirement from the bank, to Russia, Ukraine, Turkey, France, England, and included her daughters and mother when traveling to Spain in 2004. She and John took an Alaskan cruise with several close friends and family, all frequently referring to the trip and the fun they had. Her lifetime of travel began in the ‘70s with long road trips—first to Florida to see family—and to the south, highlighted by the famous water-ski show at Cypress Gardens, Florida. Future family summer road trips continued across the country to Pennsylvania, Virginia, Salt Lake City, and many other locales, mainly centered around research visits to old cemeteries, courthouses, and libraries, as well as finding and visiting long-lost relatives as her interest and knowledge grew in her genealogy work.

Much travel with family and friends was devoted to football and sports. John and Al’Louise followed the the mighty Canadian Wildcats every Friday night in the fall, beginning in 1964, including every playoff and state championship game until December 2013. They were also longtime season ticket holders for the University of Texas Longhorns, where both daughters received degrees. For many years, they traveled to the Texas-OU game in Dallas each October with her OU-devotee brother and sister-in-law, Neal and Marie Suthers.

Al’Louise was a committed philanthropist, giving time and treasure to many causes, especially the First Presbyterian Church of Canadian, and the many schools supported by the DAR, along with helping many individuals achieve their educational goals by quietly paying for the tuition and expenses of many nieces and nephews, and children of friends. Following John’s death in February 2014, she lived the last eight years of her life at the Mesa View Assisted Living Center in Canadian. This fine facility was built primarily by the efforts of the local Presbyterian Church, and supported substantially by several individuals in the community, including John and Al’Louise, and the local Methodist Church.

Al’Louise is survived by all her siblings: James William and Phyllis Suthers, of Shattuck, Oklahoma; Dr. Neal Kent Suthers, of Buffalo, Oklahoma; Grady Robinson and Sanzee Suthers, of Fargo, Oklahoma; and Lelia Sue and Roger Allen of Ponca City, Oklahoma. She is also survived by her brother-in-law, James Harvey Ramp, of Canadian; her daughters: Susan Lynn Ramp, and Beth Ramp Sturgeon and husband Britt; and so many cousins, nieces, nephews, friends, and friends who are like family, scattered all over the country.

In lieu of flowers, support of any of the previously-mentioned entities which Al’Louise enthusiastically supported would be welcomed. Lift her name up to the Lord. She has served her God well while on this Earth.

To order memorial trees or send flowers to the family in memory of Al'Louise Suthers Ramp, please visit our flower store.