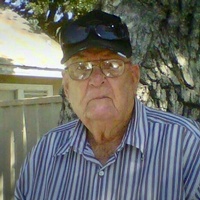 Graveside services will be Tuesday, September 18, 2018 at 11:00 am at Edith Ford Memorial Cemeteries with Pastor Donald Hill, of The River Ministries, officiating. Arrangements are under the direction of Carmichael-Whatley Funeral Directors of Canadian.

Alvin Henry Wainwright was born October 14, 1928, in Ada, Oklahoma. He grew up in Canadian, Texas, one of 7 children. He began working for Santa Fe Railroad when he was 17 years old. He met his wife, Clara Delberta Hall, while working in Arkansas and they married in 1948. Together they raised two children, Roger and Phyllis, in Canadian. In 1978, his career as a Road Master for Santa Fe began to take him all over the state of Texas. He and Delberta moved to Silsbee, San Angelo, and Lubbock, Texas, where he ultimately retired from Santa Fe Railroad in 1986. After losing his wife in 1999, he returned to Canadian for a short time before settling in Carlsbad, TX, in 2001, for the remainder of his years. It was in Carlsbad that he was able to enjoy tending to his garden and taking care of numerous goats, sheep, deer, chickens, dogs, and cats with his loving companion, Linda Lemley.

Alvin will be remembered as a man who loved to make people laugh. He was known for telling jokes and he never met a stranger. If you ever lost track of him in a crowd, you would always find him talking to a new-found friend. He loved trains, fishing and spending time with the people he loved. His children and his grandchildren were the light of his life. When his grandchildren were younger, he and his wife Delberta were known for driving 8 hours round trip just to watch them perform in piano recitals. He was very proud of his children and loved to brag about their successes.   A few short weeks before his death, he proclaimed that he had “lived a good life and had no regrets.”

Alvin is survived by his children, Roger Wainwright and his wife Ellen, of Canadian, and Phyllis Shira Spillman of Farnsworth; his grandchildren, Jennifer Harvey and her children, Brianne and Asher, of Woodward, Oklahoma; Kimberly Morrison, her husband Darrel, and their children Camille and Myles of Allen, Texas; Misty Wainwright and her children, Audrey and Allie of Burleson, Texas; April Autry and her husband, Dennis, and their daughter Teagan of Jacksonville, North Carolina; Jason Shira of Norway; his brother, Pete Wainwright and his wife Janelle of Louisiana; his sister Mary Knight of Amarillo; his loving companion, Linda Lemley, of Carlsbad and her daughter Lisa Cowart and her children; and multiple nephews, nieces, cousins and friends.

Memorials can be made to Hospice of San Angelo or the charity of your choice in his honor.

To order memorial trees or send flowers to the family in memory of Alvin Henry "A. H." Wainwright, please visit our flower store.