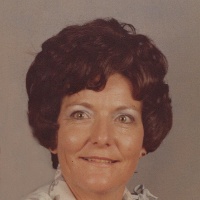 Funeral service will be 2:00 pm, Wednesday, June 19, 2019 at the River Ministries Church with Pastor Donald Hill, officiating.  Burial will follow at the Edith Ford Memorial Cemeteries under the direction of Carmichael-Whatley Funeral Directors of Canadian.

Audrey was born October 7, 1933 in Canadian to Alvin and Ruby Miller.  She attended schools in Canadian.  Audrey married B.G. Cockrell on April 2, 1950.  They made Canadian their home after a few years traveling with Santa Fe Railroad. He preceded her in death on July 25, 2013.  Audrey worked many years for Canadian Pharmacy, she enjoyed crocheting and watching the Dallas Cowboys play.  Audrey was well known for her husband’s creation “Aud” that proudly stands on a hill south of Canadian welcoming all visitors. “Aud” is a standing memorial of their love!

To order memorial trees or send flowers to the family in memory of Audrey Cockrell, please visit our flower store.