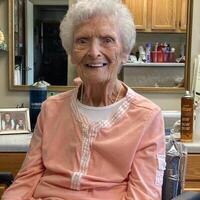 A Catholic Mass Service will be 10:00 am, Saturday, October 23, 2021 in the Sacred Heart Catholic Church, with Msgr. Michael P. Colwell, Officiating, a private family burial will be at the Lipscomb Community Cemetery.   Cremation and arrangements are under the direction of Carmichael-Whatley Funeral Directors of Canadian.

Bessie was born in Higgins, TX, in 1923, to Panhandle pioneers Claud and Clara Weaver Boone, the youngest of seven children. She would have been 98 on the 27th.  A Panhandle woman her entire life, she grew up in Lipscomb where she enjoyed a simple childhood filled with lots of fun and hard work. She was baptized as a follower of Jesus Christ at the Lipscomb Community Church at the age of seven. She was a member of the Catholic her entire adult life.  She graduated from Follett High School in 1941, having been recruited to play basketball. Bessie also participated in softball, volleyball, tennis, and band in high school. Following graduation, Bessie moved to Amarillo, working as a receptionist for Cal and Mimi Farley as they started a new venture known as Boys Ranch. She also worked at Amarillo Air Force Base as a payroll clerk and a bookkeeper for B.F. Goodrich, where she met a young veteran named Howard Gerken. They married in 1949 and raised a family in Amarillo. They were married for 54 years until Howard’s passing in 2004. She worked many years in the Amarillo ISD as a clerk at Amarillo High and Caprock. She especially enjoyed her work as receptionist at the Region XVI Service Center.

Bessie moved to Canadian in 2002, living most recently at Mesa View Assisted Living where she shared time with wonderful friends. She enjoyed crocheting, cross stitching and feeding the wild birds outside her window.  She was an AVID fan of Duke University men’s basketball, tennis and Jeopardy!!  Bessie enjoyed travelling, always ready to go on the next adventure. She could be counted on to give honest advice and unconditional love.

She was preceded in death by, her husband, Howard, and daughter Cynthia (d.1953).  Bessie is survived by sons Mike Gerken (Myra Fedele) of Picayune, MS, and Jeff (and wife Rae Ann) Gerken of Gainesville, and daughters Terry (and husband Brad) Henderson of Canadian, and Rebecca (and husband, Darrell) Wilson of Lebanon, TN. And daughter in love Beth Gerken. She was known as Nanny to her grandchildren Joshua Gerken (Felicia Marcum Bellis), Kenzie (Josh) McAfee of Amarillo, Gabriel (and wife Anne) Gerken of Houston, Miles (wife Artis) Henderson (d. 2006), Deadre Henderson (John Bell) of Dallas, Meredith Wilson of Dallas, Logan Wilson of Russellville, AR, Isaac (and wife Becka) Wilson of Lebanon, TN, Sarah (husband Cody) Welch of Denton, Hannah Gerken of Auburn, AL, and Mary Gerken of Georgetown. She also has 9 great-grandchildren. Bessie was our biggest fan, leaving us all a legacy of working hard and loving big.

Our family wishes to express our sincere thanks to the administration and staff at Mesa View Assisted Living for their love and care for our Mom, as well as to the doctors and staff at Hemphill County Hospital, for their compassion and skill.

To order memorial trees or send flowers to the family in memory of Bessie Lee Boone Gerken, please visit our flower store.