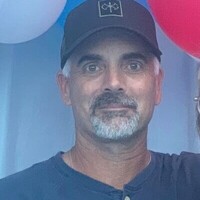 Funeral services will be 10:00 AM, Friday, August 12, 2022, at the Canadian Church of Christ with Jake Perkins, officiating.  The family will have a private inurnment service at a later date.  Cremation and arrangements are under the direction of Carmichael-Whatley Funeral Directors of Canadian.

David Lynn Albin was born on June 19, 1971, in Shattuck, Oklahoma to Larry and Connie Albin. He attended Canadian Schools and graduated from Canadian High School. Growing up David spent summers helping with wheat harvest on his grandfather’s farm in Lipscomb County. He married Amy Cox on October 20, 1990. David had a heart for helping anyone and everyone, and even served on a mission trip in Kenya. David had a smile that welcomed all who received it. He adored Amy, his kids, family, and especially enjoyed being Papa to his grandchildren and many bonus grandchildren. He was an avid Wildcat fan and loved spending his Fridays under the stadium lights watching his kids cheer and play football. He was his grandkids number 1 fan; he never missed one of their events. It didn’t matter how far he had to travel, or what sport/event it was, he was sitting in the stands with that big ole’ smile.

David was preceded in. death by his father, Larry Albin; grandparents, John and Velma Heil and Robert and Ruth Albin.

Memorials may be made to the Canadian Volunteer Fire Department, 400 Main, Attn: CVFD, Canadian, TX 79014.

To order memorial trees or send flowers to the family in memory of David Lynn Albin, please visit our flower store.

Church of Christ of Canadian