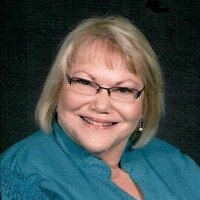 Arrangements are under the direction of Carmichael-Whatley Funeral Directors of Canadian.

Deborah Harmon Hunt was born January 5, 1953, in Durant, OK to Herbert & Yvonne Harmon.  She grew up in Sunray and graduated Sunray High School.  Deborah married Gary Hunt on April 22, 1972, at the First Baptist Church in Sunray, TX.  They have lived in Canadian since October of 1973.  Deborah was a member of the First Baptist Church and had loved the Lord since she was a small child.  She was known for having a heart of gold, an infectious smile and an overall spirit of kindness towards everyone.  She loved to cook and provide meals for family and friends.   You always knew you were in for a culinary treat if you were invited for a meal cooked by Debbie.  The absolute highlight of her life was her role as Nanny to her two beloved grandchildren.  They were the light of her life and her source of joy and laughter for many years.  Nanny babysat both of her grandkids for the first 4 years of their life.  It was always so important for her to build close relationships and create memories with her grandkids.  Debbie suffered for many years with a neuromuscular disease, Myasthenia Gravis but she never let her disease interfere with her precious time with her family.  During their 49 years of marriage, Gary and Debbie spent many summers traveling to the mountains in Colorado, New Mexico and Washington state.  She always enjoyed traveling and spending time with her family.  Deborah was also a member of the Choctaw Nation.  She was very proud of her Choctaw heritage and being on the rolls of the Choctaw nation.

Deborah was preceded in death by her parents Herbert and Yvonne Harmon, her father and mother-in-law Thomas and Margaret Hunt, and her brother-in-law Larry Jo Hunt.

To order memorial trees or send flowers to the family in memory of Deborah Hunt, please visit our flower store.