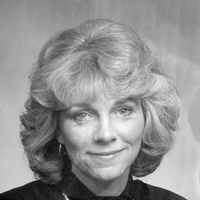 Diane Jackson, 69 formally of Canadian passed away April 26, 2019 in Round Rock.

Celebration of Life service will be 12:30 PM, Saturday, May 11, 2019 in the Gallery at the River Valley Museum. A private family inurnment is scheduled at the Edith Ford Memorial Cemeteries under the direction of Carmichael-Whatley Funeral Directors of Canadian.

Diane was born April 18, 1950 in the Hemphill County Hospital to William J. and Lilree Jackson. She grew up in Canadian with her school days culmination in her stint as the shortest drum major in the history of the Canadian Wildcat Band. Diane graduated with the CHS class of 1968; she then attended Park College in Missouri, UT Austin, and then enrolled at UT Law School. Her law education was interrupted the summer after her first year when she met and married Canadian veterinarian Pat Crouch. She remained in Canadian and raised her two daughters, Katie and Sara Pat, acting as the Chamber of Commerce manager for many years. Diagnosed with MS at age 35, Diane determined to live life fully. She loved to garden, and many will remember her yard of beautiful flowers and roses. Continuing her work with the Chamber and the community, Diane was proud of her role in helping to establish the trail at Lake Marvin to the historic Landmark Cottonwood Tree and she was successful in bringing the MS 150 to the Panhandle and through Canadian. Diane later completed her education at the University of North Texas, earning her Bachelor of Science Degree in rehabilitative services. In 2000, she moved to Central Texas to be nearer to her parents and her daughters. A highlight of her life was returning every five years to the Canadian school reunion to revisit her home and see all her old classmates and close friends. She was still talking of it and hoping to attend in 2020.

Diane preceded in death by her father, William J Jackson in 2009.

Memorials may be made to the National Multiple Sclerosis Society.

To order memorial trees or send flowers to the family in memory of Diane Jackson, please visit our flower store.