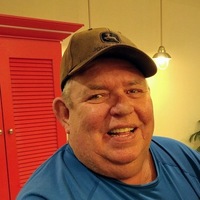 Earl was born on November 16, 1953 in Clayton, New Mexico to Ruth Ella Pundt and Carey May. After living in Texline and Seminole, the May Family eventually returned to Lipscomb County, where Earl worked hard to help his family make the farm productive. Earl graduated from Canadian High School in 1972, where he played varsity football and was active in the Future Farmers of America. After high school, Earl graduated with a degree in Diesel Mechanics from Texas State Technical Institute in Amarillo, Texas. Earl worked in several jobs in the oil field, and also drove a truck, where he hauled goods cross country, a job that produced many stories that he loved to tell.

Earl made friends every time he entered a room and would remember you a decade later. He never found a road in Hemphill or Lipscomb County in which he hadn’t already driven and more times than not he had a story about it, and if he told you that story once he had probably told you a dozen times. Earl spent his mornings drinking coffee and figuring out the how the weather would be wherever his kids had traveled, and he spent his evenings either watching Texas Rangers baseball or listening to Canadian Wildcat football. Earl also loved the ham radio hobby, always keeping his call sign, WD0GSV, active on local repeaters wherever he happened to be. Earl was proud of his children and grandchildren, and he loved to brag about them to anyone that would listen, especially to his friends around his cabin in Eagle Nest, New Mexico. Earl was preceded in death by his parents and his only brother, Carey Thomas May.

In lieu of flowers, the family requests that donations be made to the Canadian Wildcat Athletic Booster Club, the Kentucky Horse Council, or the Officer Down Memorial Page.

To order memorial trees or send flowers to the family in memory of Earl Jefferson May, please visit our flower store.