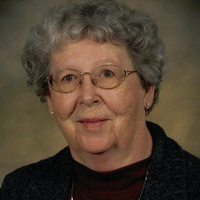 Graveside services will be 2:15 PM Monday, August 13, 2018, at Fairview Cemetery in Pampa, and memorial services will be 3:00 PM Monday at First United Methodist Church in Pampa, with John Curry, and Rev. Ruby Moultrie, pastor, of First United Methodist Church, officiating. Arrangements are under the direction of Carmichael-Whatley Funeral Directors.

Mrs. Morrison was born February 6, 1926 to Sallie and Steve Huff in Canadian. She grew up and attended schools in Allison where she graduated from Allison High School. After high school, she enrolled in Texas State College for Women in Denton. After graduating from college, Fran moved to Pampa where she would teach 4th grade at Sam Houston Elementary School. While in Pampa, she met the love of her life, Don Morrison, on a blind date, and they married June 10, 1954 in Hemphill County. Fran and Don were actively involved in Republican politics; organizing the Roberts County Republican Party and participating in many state and national party activities. They enjoyed many years of marriage on the ranch before his death on October 9, 2002.

Fran was a longtime and active member of First United Methodist Church. She was a civic minded lady who was an active member of the 20th Century Cotillion Study Club as well as other organizations. In her spare time, Fran loved to work in her flower garden. She loved antiques and traveling, as well as cooking and entertaining. She will be greatly missed by her family and friends.

Survivors include three sons, Dusty and wife Kathy of Weatherford, Frank and wife Lynette of Lubbock, and Jim and wife Shari of Amarillo; three granddaughters, Hannah of Lubbock, Shelly of Carrollton, and Kaylin of Amarillo; a grandson, Frank Willis, Jr., and wife Lindsey of Lubbock; two great grandchildren, Tyler and Karlee, both of Lubbock; and other extended family.

Fran was preceded in death by her parents; her husband, Don; a son, David; a sister, Patsy Wright; and a brother, Boyd Huff.

To order memorial trees or send flowers to the family in memory of Frances Huff Morrison, please visit our flower store.