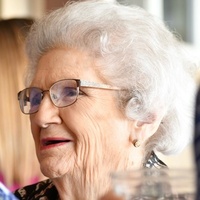 Funeral services will be 2:00 PM, Tuesday, December 21, 2021, at the Canadian First United Methodist Church, with Rev. Andy Taylor and Pastor Daryle Perry, officiating.  Burial will follow at Edith Ford Memorial Cemetery.  Arrangements are under the direction of Carmichael-Whatley Funeral Directors of Canadian.

Frankie Louise Stoker Hill was born May 14, 1929, in Colorado Springs, Colorado to Frank E. & Mary Wilma Davis Stoker.  The family moved from Colorado Springs to Overland Park, Kansas, joining the Buffalo Bill Wild West Show.  Frankie was a trick rider and was homeschooled while traveling with the show.  She attended high school and graduated from Overland Park High School in Overland Park. While on the rodeo circuit, she met and married Clayton Hill on August 31, 1949.  In the early 50’s, they settled in Clayton’s hometown of Canadian and raised their five children.  Frankie & Clayton ran Clayton Hill Trucking until his death in November 1977.  Frankie was a strong woman; following her husband’s death, she ran for Justice of the Peace of Hemphill County in 1980. She served in that office for 26 years. Frankie was known to be tough but fair and positively impacted a lot of lives.  She was an active member of the Methodist Church and served as the treasurer of her Sunday school class.  Following her retirement, she enjoyed staying at home and loving her family. She was known to be an amazing cook.

Frankie was also preceded in death by her parents; a son, JC Hill; and a sister, Bessie Fugate.

To order memorial trees or send flowers to the family in memory of Frankie L Hill, please visit our flower store.