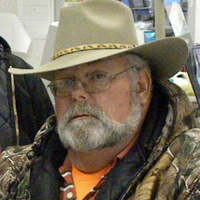 Sid Henderson, 69 of Canadian passed away Tuesday, November 26, in Canadian.

Graveside Services will be 10:00 AM, Saturday, November 30, 2019 at the Prairie Dell Cemetery in the Gem Community with Pastor Andy Taylor of Trinity Fellowship in Sayre, OK and Pastor Donald Hill of the River Ministries in Canadian, officiating.  Arrangements under the direction of Carmichael-Whatley Funeral Directors of Canadian.

George Sidney "Sid" Henderson was born to James Buron Henderson and Helen Elizabeth Walker Henderson on February 7, 1950 in Canadian. He began his education in the one-room Blue Ridge School on Hwy 33, later graduating from Canadian High School in 1968. He attended West Texas State University in Canyon for 3 years, studying Chemical Engineering, but returned to Canadian to help operate the family farm.  Sid owned and operated a custom harvesting business that traveled from central Texas to South Dakota during harvest season. He worked as a trucker during the off times. During one trip hauling drilling mud from Wyoming to Texas he met his wife, Janet Lindsay, in Loveland, CO. They had two daughters.

Sid had a beautiful tenor voice and loved singing for the many churches he was part of during his life. He also enjoyed riding Harley-Davidson motorcycles. For many years, he was a member of the Gem Volunteer Fire Department and helped build several brush fire trucks for Hemphill County.

To order memorial trees or send flowers to the family in memory of Sid Henderson, please visit our flower store.