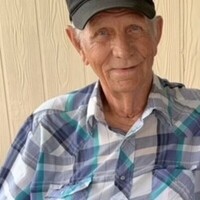 Funeral services will be 10:00 AM, Wednesday, April 20, 2022 at Carmichael-Whatley Canadian Chapel, with Ed Hedgecoke and Pastor Barry Hosford, officiating. Burial will follow at Edith Ford Memorial Cemetery.  Arrangements are under the direction of Carmichael-Whatley Funeral Directors of Canadian.

George Guinn Wilson was born July 29, 1943, in Breckenridge to George W. & Montie Campbell Wilson. He graduated in 1961 from San Angelo Central High School. George enlisted with the US Navy, receiving his high school diploma aboard ship. He was in Cuba during the Cuban Missile Crisis.  George married Carol Ann Carr, February 3, 1968, they were together 48 years.  She preceded him in death in January 2016.  He spent most of his life working the oilfield, traveling all over the world.  In later years he ran a cow/calf operation with his son until retiring in 2015.  George was a good christian man with strong family values and a very strong work ethic.  He loved spending time with family and friends.  George was a member of the American Legion, serving with Canadian Post 56 and Archer City Post 198 for over 50 years.  He was a big kid at heart and loved playing his X-Box, well into his seventies.  George also enjoyed playing dominoes with his legion buddies and at family gatherings.

George had a few favorite quotes: “Do it right or don’t do it at all”,  “Always give it your all”,  “Bout like a soup sandwich”.

George was also preceded in death by his parents.

To order memorial trees or send flowers to the family in memory of George G. Wilson, please visit our flower store.