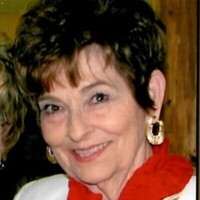 Private graveside services will be held Wednesday at Edith Ford Memorial Cemetery with Ben Mathers officiating. Arrangements are under the direction of Carmichael-Whatley Funeral Directors of Canadian.

Jacqueline Jewell Sharp was born June 24, 1940, in Los Angeles, California, to Gladys (Robinson) and Shelby Burnett Sharp. She grew up in Canadian.

After a senior year as head cheerleader, Halloween Carnival Queen and Betty Crocker Award winner, she graduated from Canadian High School in 1958.

Jackie married Tommy Mitchell in 1959 and was a homemaker and mother of two redheads. In 1979, Jackie married Don Powell, remaining by his side until his death in November 2004.  She enjoyed fashion and travel, especially trips to Las Vegas. Before retirement from the kitchen, she was known as an outstanding cook. She was managing partner at Hood Abstract.

In 2016, Jackie and Garlon Rogers joined forces as lifetime friends and companions for a four-year marriage.  She was a member of Locust Grove Baptist Church.

She is survived by her daughter Robin Mitchell and partner Gary Bass of Canadian, and her son Mike Mitchell, of Dallas; her stepdaughter Donna Powell and husband, Jerry Palon, of Southlake.

To order memorial trees or send flowers to the family in memory of Jacqueline S. Powell, please visit our flower store.