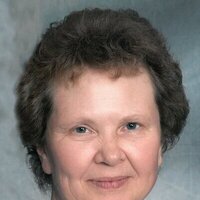 Johanna Rae (McIntosh) “Jo” Manning was a loving wife, mom, MorMor (grandmother), daughter, sister, and friend. She left this world, following a brief illness, on Sunday, March 27, 2022, in Amarillo, at the age of 64 and found herself in the arms of Jesus. What a glorious day and eternity for her!

A celebration of Johanna’s life will be at 11:00 AM Saturday, April 16, 2022, at the First Christian Church in Canadian, Texas with Pastor Matt Cook and Garrison Jones officiating. Cremation and arrangements are under the direction of Carmichael-Whatley Funeral Directors of Canadian.

Jo was born to John Elliott and Wilma Jeanne (Anderson) McIntosh on September 16, 1957, in Cortez, Colorado. Johanna spent most of her early life in Liberal, Kansas. After high school she relocated to Denver, Colorado for several years before moving to Canadian to work for family in their oilfield drilling fluids business. It was here that she met her future husband.

Johanna married her best friend, Hoyt Manning, on August 3, 1982, in Canadian. They were so in love for over 40 years. Together they had one child, Desirae Savanna. Jo gained a son, whom she loved as her own, when Desirae married Luke Havens. MorMor had two granddaughters, Savanna Rae, and Lily Mae, who were as precious to her as life itself.
Jo loved her job (ministry) at the First Christian Church where she remained for over 32 years. She absolutely loved her church family and many, many others. She always stood ready to serve in any way possible. Jo was known for being a great listener and was very adept at offering comfort and reassurance. One of her priorities was to greet people with a smile whether in person or on the phone.
She never fretted about her own discomfort, as she felt that the wants and needs of others took precedence. Despite some significant physical limitations, she was a tireless servant when it came to her church family and her husband, children, grandchildren, neighbors, and friends.

Miss Jo loved Jesus with all of who she was and enjoyed teaching others about Him. She led beginner church for many years, relishing the privilege of teaching bible lessons to many children, several of whom became her valued assistants as they grew older.
There was never a dull moment with her. Jo was recently described as being feisty and fun and having the biggest heart, which is so true. Jo treasured time with family. She loved baking with her granddaughters, who should now be able to bake snickerdoodles, banana bread and whole wheat bread blindfolded! She had such a zest for life, she enjoyed an intimate night at home as much as an adventure. She had a gift which allowed her to be content wherever she was, from which she did not waver. Even in her final few days which were fraught with so much pain and difficulty she remained kind, gracious, and thankful!
Johanna Rae Manning made our world a better place.

In lieu of flowers please donate to your favorite charity.

To order memorial trees or send flowers to the family in memory of Johanna Rae McIntosh Manning, please visit our flower store.