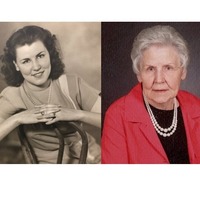 LaNell Scribner Leonard, 93, formerly of Canadian passed away on Tuesday, August 4, 2020 in Amarillo.

Graveside services will be 10:00 AM Friday, August 7, 2020 at Mobeetie Cemetery with Ben Mathers officiating. Arrangements are under the direction of Carmichael-Whatley Funeral Directors of Canadian.

LaNell Scribner was born November 3, 1926 in Mobeetie to James Arch and Flora Mae Morgan Scribner.  After graduating from Mobeetie High School, Nell was employed by the First State Bank of Mobeetie.  She and Dinzel Leonard were married on December 24, 1946. They celebrated 71 years of marriage before he preceded her in 2017.

When Dinzel was called into the ministry, Nell answered that call as well.  She was the epitome of a pastor’s wife, a gracious host, a kind friend and confidant, consummate church worker, and spiritual mentor.  She was a beloved wife, mother, and Nanny to her grandchildren and great grandchildren.

To order memorial trees or send flowers to the family in memory of LaNell Scribner Leonard, please visit our flower store.