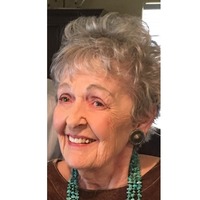 Funeral services will be at 2:00 PM Saturday, March 20, 2021 at the First United Methodist Church of Canadian, TX. Pastor David Gerhardt officiating. Grandsons will lovingly be her pallbearers.  Burial will follow in Edith Ford Memorial Cemetery under the direction of Carmichael-Whatley Funeral Directors of Canadian.

Marva was born June 12, 1930 in Canadian to Van and Eula Pearl Petree. She was joined by her sister Annette a few years later. They grew up as country girls who walked across the road to attend MK school. Marva and Bob eventually acquired that school which adjoined their property.
Marva attended West Texas State University for a semester.

She had two little girls while living and ranching in South Dakota, then returned to Canadian where she worked as an operator for the phone company. She met Bob Hohertz who was working for Hughes Tool Company. They both thought they had hit the jackpot. Bob was handsome and loved her and her girls and she was a strong, beautiful, and adventurous woman. They married in February 1958 and moved to Spearman. Jeff and Doug were born in the next few years and the Hohertz clan was established.

Marva quickly jumped into every activity from being a member of the First United Methodist Church, Women’s Bible Study, Beta Sigma Phi Sorority, homeroom mother, PTA, every basketball, track and football event. Next came cheerleading, 4H, stock shows and band concerts. She was an excellent seamstress, quilter, artist, and a fantastic cook. She was a loving mother, grandmother, and great grandmother who strived to be a role model of integrity, duty, and loyalty. Marva, like Bob, provided guidance through action, subtle and not so subtle words through the many misadventures provided by the family.

Marva’s sense of adventure prevailed as she not only took the family on ski trips but strapped skis on herself and came down the mountain after prematurely jumping midair from the ski lift. In her 80’s she jumped on a wave runner frequently racing around Lake Hamilton; Marva never learned to swim. She had an outrageously fun sense of humor, beautiful sense of style and fashion, and lit up every room she entered.

She was preceded in death by her parents, a sister, Annette Lippold, and her beloved husband Bob.

To order memorial trees or send flowers to the family in memory of Marva Lee Hohertz, please visit our flower store.