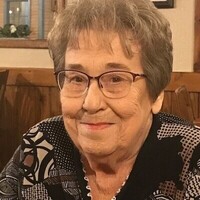 Graveside services will be 2:00 pm, Monday, October 18, 2021, in the Lipscomb Cemetery, with Pastor Donald Hill, officiating.  Arrangements are under the direction of Carmichael-Whatley Funeral Directors of Canadian.

Public viewing will be at Carmichael-Whatley Funeral Directors of Canadian; Saturday, 1 to 8 pm; Sunday 1 to 8 pm and Monday, 9 am to 12 pm.

Mary Whisenant was born July 19, 1934, to Billy and Opal Whisenant in Pyron in her Grandmother Young’s home.  She graduated with the class of 1951 in Sweetwater and attended Texas Tech University.  Mary married R.T. Laurie in March of 1952.  Following their divorce, she married W.W. “Bill” Gunn in February 1958.   Bill and Mary were married 38 years, he preceded her in death on February 29, 1996.  She was a member of the Lipscomb Union Church, she taught Sunday school and was the church secretary for several years.  Mary worked in the Lipscomb County Courthouse from 1955 to 1995, she served as the Lipscomb County Tax Collector from 1978 until retiring in 1995.  Mary was a member of Eastern Star and was the CL&O secretary.  She was admired by her family for her speed in shelling blackeye peas, “the fastest ever”.  Christmas was Mary’s favorite holiday, she started asking for the Christmas lists in August even though she had already started collecting gifts for her family.  Mary loved Hallmark ornaments and found pure joy in selecting special ornaments for her entire family.

Mary was also preceded in death by her parents, William and Opal; a brother, W.B. Whisenant; a sister, Sarah Sweetwater; an infant daughter, Deborah Ann and a son-in-law, Bill Kells.

Memorials may be made to a favorite charity.

To order memorial trees or send flowers to the family in memory of Mary Whisenant Gunn, please visit our flower store.