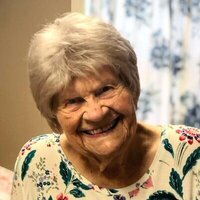 Graveside services will be at 11:00 AM Saturday, April 2, 2022 at Darrouzett Cemetery with Dick Babitzke, a family friend, officiating. Arrangements are under the direction of Carmichael-Whatley Funeral Directors of Canadian.

Palma, the fourth of six children, was born July 22, 1920 in Logan, Oklahoma to Grant and Olive Burditt. Palma grew up on the family farm where she enjoyed spending time with her younger brother Bob. She attended the one-room schoolhouse in Surprise, Oklahoma until completing her 8th grade education, after which time she and her younger brother Bob transitioned to Beaver High School; where the two lived with a family for the first two years, then into an apartment until graduating in 1939. Following graduation, Palma attended Beaches beauty school in Enid, Oklahoma where she was trained as a beautician and manicurist. Upon completion, she returned to Beaver to live and work in a salon as a hairdresser. It would be during that same time Palma would meet the love of her life Eddie Koschke as a result of a blind date. Palma reported the two hit it off, and enjoyed one another’s company, that is when they were able to see one another. Unfortunately, Eddie lived and worked in Colorado. When Eddie learned Palma was starting to show interest in another fella, he rushed home determined to ask her to marry him. He proposed and she said yes.

On September 25, 1942 the two traveled to the Baptist Church in Beaver, accompanied by Bob as their witness. With no minister present to perform a ceremony, they drove onto Forgan and eventually back to Beaver where they found the pastor of the Church of God Church dressed in paint-stained overalls, painting the outside of the church. When asked if he would perform the ceremony he reluctantly agreed. Immediately after saying their “I do’s” the noon whistle blew. They celebrated 52 years of marriage before he passed away on February 9, 1995.

Palma and Eddie returned to Colorado after marrying, where they both worked in the same steel mill producing metal coils. After some time had passed, they returned to Oklahoma to be closer to family, moving to Darrouzett in 1946 where they would welcome their first and only child – Michael. Palma owned and operated her own beauty salon for many years. She enjoyed playing the piano, giving lessons, painting, playing cards and games with friends. She was actively involved in the First Baptist Church; serving as a nursery worker, and as one of several women who helped to create the stain glass windows of the church, which are still present today.

Few would argue the talent Palma possessed and demonstrated in the numerous quilts she made for herself and others. Each quilt was carefully hand pieced, stitched, and quilted; taking note of every detail and never using a sewing machine. Beyond this, she was actively involved in the American Legion Auxiliary, Darrouzett Deutches Festival, and even acted as a secret Santa for a few years with her dear friend, Jimmy. Palma was a loyal friend who was feisty and loving. She had a great sense of humor and was a lady who remained positive, no matter the circumstances. The loss of her son, Michael in 1971 left an empty spot in her life, but even still, she managed to find the positive by saying she was happy with her life because she got to raise her little boy. Following Michael’s death, God blessed her and Eddie’s lives with four little girls each of whom adopted and called them grandma and grandpa. The bond they shared was deep and proved that blood is not the only indicator for what defines a family, rather it is the love that is shared with one another that is strongest indicator of all.

Palma was preceded in death by her parents; a son, Michael Koschke; 4 siblings, Herbert, Edna, Florence, and Bob.

The family will receive friends at the funeral home on Friday from 6:00-7:30 p.m.

To order memorial trees or send flowers to the family in memory of Palma Koschke, please visit our flower store.