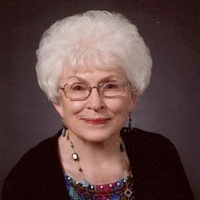 Memorial service will be 2:00 pm, Sunday, February 24, 2019 at the First United Methodist Church with Rev. David Gerhardt, pastor, officiating.  Services are under the direction of Carmichael-Whatley Funeral Directors of Canadian.

Patsy Gayle Cook was born December 18, 1932 in Canadian to Otis Cook & Eunice Morris Cook.  Pat attended schools in Canadian and was crowned football queen, basketball queen and carnival queen.  She married Weldon Rhea Wilson on June 22, 1951 in Clovis, NM; they were married 67 years.  He preceded her in death on August 22, 2018.  Rhea and Pat owned and operated the Canadian Laundry and Dry Cleaners for forty years.  They enjoyed going to the lake with family and friends.  Pat loved spending time with her family, fishing and was known to play a mean hand of bridge. She was an active member of the Methodist Church prior to her illness and a member of the DAR.

Pat was also preceded in death by her parents and siblings Annie Lois Cook Beghtel, Lawrence Cook and Dale Cook.

To order memorial trees or send flowers to the family in memory of Pat Wilson, please visit our flower store.