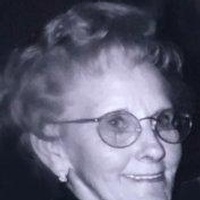 Graveside services and interment will be held at 2:00 pm, Wednesday, November 28, 2018 at Good Hope Cemetery in Helena, Oklahoma, with Amelia Lemons, a granddaughter who is in the ministry, officiating. Pat will be laid to rest in the family plot with loved ones who have gone before. Service will be under the direction of Carmichael-Whatley Funeral Directors of Canadian.

Pat Hutson was born July 8, 1931 in Aline, Oklahoma into the family of Loyd McNabb and Thelma Mae Willie McNabb. The family later expanded with the addition of brother Monty McNabb and sister Beverly McNabb Penquite. She grew up and received her formal education in the Helena area graduating from Helena High School. She married Elmo Dwayne Baggett and they had five children known in Canadian as “the Baggett Bunch”. She lived in Canadian from 1959 until moving to Amarillo two years ago.

Canadian was Pat’s home. She was an entrepreneur opening and running the “Park Drive-In” restaurant for seven years. She later entered the banking industry as assistant cashier at the First State Bank of Canadian. She was at the First State Bank for 22 years. Pat’s occupational choices made her a face for Canadian hospitality whether cooking at the drive-in or working the drive up window at the bank. As much as she immersed herself in her occupations it was the person to person connections she cherished. One of those connections enabled her to find love a second time when she met and married Troy Hutson, June 11, 1998. She and Troy took care of one another until her death.   Pat lived a full life that included a passion for giving back through her volunteering for Hemphill County Hospice (where she received volunteer of the year) a Russian mission trip, or simply visiting with a neighbor. She loved quilting and won 7th prize in the Texas State Fair. Of all the things that gave her joy it was all about family and that was what completed Pat Hutson as a loving human being.

Survivors include her husband Troy Hutson of Canadian/Amarillo; five children, Lynn Baggett and wife Beverly of Konawa, Oklahoma, Doug and wife Keri of Bozeman, Montana, Dena Williams and husband Ronny of Van Alstyne, Texas, Dian Adams and husband Jean François of Plano, Texas, and Melanie Lemons and husband Denny from McKinney.  She is also survived by 15 grandchildren and 28 great-grandchildren. Survivors include Troy’s children which she considers family; Linda and husband Gary Grewell and family of Thornton, Colorado, Debbie and husband Mike Snider and family of Wichita, Kansas, Mark and wife Joy Hutson of Amarillo, Texas. Pat is also survived by her Aunt Dorothy Booze of Albuquerque, New Mexico.

Pat was proceeded in death by her parents and both siblings.

To order memorial trees or send flowers to the family in memory of Patricia (Pat) Jo McNabb Hutson, please visit our flower store.