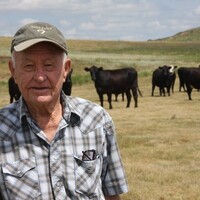 Quentin Isaacs passed away at his ranch home on January 2, 2022, surrounded by his loving family and caregivers, having fully used up his mortal life at 103.

Private family graveside service will be in Edith Ford Memorial Cemetery under the direction of Carmichael-Whatley Funeral Directors of Canadian. His lifelong friend Ben Mathers will officiate.

Quentin was born in Canadian on December 6, 1918, the youngest of the four children of the late John Childress Isaacs and Viola May (Bloom) Isaacs. He was born during the 1918 worldwide influenza outbreak, and was briefly separated from his mother, who fell ill with the flu.
Quentin grew up in Canadian, spending his childhood in fun and mischievous pursuits. He attended Canadian schools, followed by one semester at Texas Agriculture and Mining College, but classroom life was not for him. Quentin joined the Brownsville-based U.S. Horse Cavalry whose mission was to patrol the rough unsettled southern border and protect it from surprise attack by the growing German power. During this time, he flew in the Air Wing, and but largely helped care for the Cavalry Remuda of 20,000 horse in El Paso. He later remarked that he thought he had seen enough horses to last him a lifetime. Quentin married Georgia Leigh Morris, a local girl, on Feb. 14, 1945, in Amarillo, having to wake up the unsuspecting preacher and his wife late at night to perform the ceremony in their living room. They returned to Canadian to make their home, start their family, and begin his life’s work as a ranchman. In 1959, they moved to their permanent home on the ranch, where he devoted the rest of his life to ranching and providing for his family, and his pursuit of raising a good bunch of calves every year.
Quentin was of the old generation of ranchers: He saved everything, bought nothing he didn’t need, and could fix anything. He paid his bills the day they came and kept his business private. He took great pride in his ranch in Hemphill County and was a steward to the land. Every day was a day to make things better.
Quentin lived his life with the desire and plan to keep family and the family ranch together. He loved cutting hay along Red Deer Creek, checking cattle, quail hunting, and fishing. Most of all he loved sharing all of those things with his family. He was respected throughout the ranching community as honest, hardworking, and with a knack for when to sell and when to buy. Quentin was a positive man with an infectious smile, always finding the good in situations and people. He was a curious lifelong learner, loving to read and visit new places. He was a friend to many and always eager to meet new friends.

He was preceded in death by his wife, Georgia Leigh; his parents; brothers, Calvin and John; and sister, Anna.

He is survived by his sons, David Quentin Isaacs Jr. and wife Ann and William Calvin Isaacs and wife Valerie; his grandchildren, David Quentin Isaacs III and wife Shelly, Anna Heather Isaacs of Austin, Leah Rachelle Isaacs of Bozeman, Montana, and Thomas William Isaacs and wife Anna; along with their children and his great-grandchildren, Leona Helen, Quentin James, and Maggie May.
Quentin is survived by his lifelong ranch foreman, Billy Schafer, who came to find work at 19 and never left. He’s still taking care of the cattle for Quentin every day. Billy remembers the words that started each workday: “Well, we better get going.” Early on, that meant tying the horses to the Willys Jeep, for lack of a horse trailer, and heading out for the day.
He also leaves behind a wonderful group of caregivers, who have devoted their time, skills, patience, and love, and who made it possible for he and Georgia Leigh to stay in their home for the past 10 years.

The family requests any memorials be to his favorite charities: the American Red Cross and the Salvation Army.

To order memorial trees or send flowers to the family in memory of Quentin Isaacs, please visit our flower store.