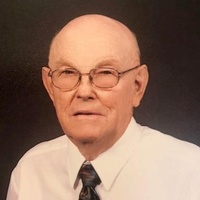 Rhea married Patsy Gayle Cook on June 22, 1951 in Clovis, New Mexico.  His first paying job was with the Canadian Record as a printer’s devil.  He worked in the laundry dry cleaning business for 50 plus years.  Rhea and Pat owned and operated the Canadian-Perryton Laundry Dry Cleaners from 1964 until the early 2000’s.    As a vital part of his community, Rhea was active in serving on the Canadian Independent School Board, Canadian-Hemphill County Chamber of Commerce, a member of Lion’s Club and other community functions.  As a member of the First United Methodist Church he showed his love and dedication for the church by teaching Sunday School and being an active leader in the “ASK” children’s program.  Rhea loved following and supporting his grandchildren and great grandchildren’s activities.  He was a familiar sight at “practice”.   Rhea and Pat were loyal Wildcat fans and supporters.

To order memorial trees or send flowers to the family in memory of Rhea Wilson, please visit our flower store.