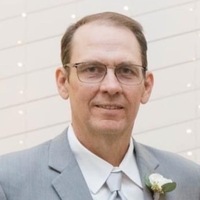 Services will be at 2:00 PM on Tuesday, December 6, 2022, at the First United Methodist Church in Darrouzett with David Rush officiating. Burial will follow at Lipscomb Cemetery under the direction of Carmichael-Whatley Funeral Directors of Canadian.

Visitation will be from 6:00 PM to 7:30 PM on Monday, December 5, 2022 at Carmichael-Whatley Funeral Directors of Canadian.

Robert Dean Duke was born on December 28, 1968, in Shattuck, Oklahoma to Bobby K Duke and Bessie Lee Fausset Duke. He was the last of Bessie Lee and Bob’s children. Thus, he was the baby of the family. Robert would tell you that about half of the school faculty in Darrouzett would retire or just outright leave education because of him. Here’s a couple examples of why that might be true. Apparently, and some of y’all know this, Robert was a talker from early on. His fifth grade teacher, Vesta Newman, was preparing Robert for a District Spelling Bee. Vesta would give Robert a word to spell, have him tape record the word, then listen to the word, spell the word, and then use the word in a sentence. Along came the word “blatherer”. Robert wasn’t sure what blatherer meant so Vesta had to use the word in a sentence for him to understand. She said, “Robert, you are a blathering blatherer.” Vesta thought she was super clever and really funny until Robert replayed the tape recorder and had recorded her using “blathering blatherer” against him. He was clever and funny that way! Oh, and by the way, Mr. Blatherer won that District Spelling Bee. Robert did graduate from Darrouzett High School in 1987 and then went on to college - West Texas A&M University and the University of Texas in Arlington. Check that off the list, which is to say Robert loved lists.

He had purpose and intention in everything he did. Let’s move to the next item on his list. Exactly 11,734 days ago, Robert and Charlene met in Las Colinas, and thus began their love affair. On April 11, 1991, exactly 11,562 days ago, he married Charlene Jenkins, and together they built their businesses and their beautiful family. Robert had a great mind for business, and he had such an entrepreneurial spirit. Some of Robert and Charlene’s businesses were: Duke Auctioneering, Duke Electronics, and Duke Equipment, to mention just a few, but this makes it sound like these businesses were the most important things to him. However, that’s not true. No matter if Robert was a pilot, a teacher, or a business owner, Robert’s first business was his cattle. Whatever it took to take care of his cattle, he did. He loved ranching.

Next on the list was for Robert to start a family. Robert was extremely proud of his two sons RD and Draylen and wanted nothing more for them than to be strong, respectful, and successful men who could graciously handle whatever life threw at them. Robert lived his life in the following ways which is what the boys have now taken as their own: don’t lie, be honest, take care of the important things in life: like your finances and your responsibilities, if you borrow something, take it back as you found it, if not better, don’t procrastinate, When problems arise, think them through, come up with several solutions, and most importantly take care of your family. Speaking of family, the boys were never without Robert, and Charlene, at any of their football and basketball games, FFA, 4H, or whatever they were involved in. Robert was there, every game, and that’s saying something. We would be remiss if we didn’t mention this last little bit. Something that Robert is well known for is standing up for what is right, what is good, and what is the right thing to do, and there’s no backing him down when he’s right. And surely when he’s not, he would admit he was wrong. But that didn’t happen much. And this was surely not on Robert’s list but, on December 1, 2022 at 9:08 PM Robert received his last one-way flight path to a destination grander than any before and he is reunited with those who had arrived before him and where he awaits the loves of his life to join.

He was preceded in death by his parents, Bobby and Bessie Lee Duke.

Robert is survived by his wife, Charlene Duke of the home; two sons, Robert Dean Duke, Jr. and wife Mabry and Charles Draylen Duke and wife Brantly, all of Spearman; five siblings, Sherrie Burns of Richardson, Coeta Rhodes and husband Rick of Weatherford, Brad Altmiller and wife Mary of Darrouzett, Kay Duke and wife Michele of Darrouzett, and Barbie Slatton and husband Rick of Ocala, Florida; and numerous nieces and nephews.

To order memorial trees or send flowers to the family in memory of Robert Dean Duke, please visit our flower store.