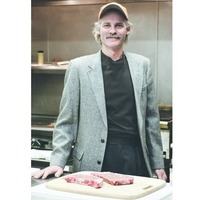 Celebration of life memorial services will be 2:00 PM Saturday, May 1, 2021 at North Fork of the Kiowa Creek (northeast of Darrouzett) with Rev. Jon Nichols, pastor of Darrouzett and Follett United Methodist Churches, officiating. Viewing will be from 9:00 AM Wednesday, April 28, 2021 until 8:00 PM Friday, April 30, 2021 at the funeral home in Canadian. Cremation and arrangements are under the direction of Carmichael-Whatley Funeral Directors of Canadian.

Todd Alan Yauck was finally born on August 21, 1959 in Perryton to David Jr. and Betty Yauck. He was the baby, and he never got over it. He did not like peas. He loved his family, his friends, and his community. Todd loved all kids, and they loved him back.

Todd graduated from Darrouzett High School in 1978. His education continued at West Texas State University, where he was a Lambda Chi Alpha, graduating with his Bachelor of Science in Ag Business in 1982. Todd then began his banking career, which he continued for seven years in Booker and Darrouzett. Todd was a lifelong rancher and entrepreneur. He opened The General Store in Darrouzett with his brother in 1989, and in 2004 he purchased Booker Grocery, subsequently adding a café and catering services.

Todd enjoyed traveling. One of his most memorable trips was taking Darrouzett favorite, Jimmie Gensman to Cancun, Mexico. Todd was an avid golfer, traveling to many well-known courses with his group of friends, who are honorary pallbearers. He was instrumental in the planning and construction of the Darrouzett Golf Course. Todd loved his community of Booker, especially engaging with the Booker youth. He sponsored many soccer and baseball teams through the years. Another passion of Todd’s was hunting and shooting. Todd also loved improving the ranch, specializing in dirt work and opening up water sources, all the while refusing fence work.

Todd is preceded in death by his father, David Yauck Jr.; his brother-in-law, BJ Patton; and grandparents, David F. and Bertha Yauck and William and Sadie Terrel.

Directions: East of Darrouzett on Highway 15, turn North on FM 2248, 2 miles turn East into cattleguard. Right past the bridge. If you get to Oklahoma, you've gone too far.

To order memorial trees or send flowers to the family in memory of Todd Alan Yauck, please visit our flower store.

North Fork of the Kiowa Creek