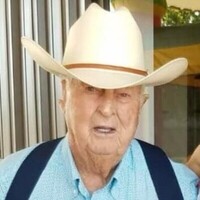 Services will be at 2:00 Wednesday, April 6, 2022 at The River Ministries in Canadian with Dale Meadows officiating. Burial will follow in Zybach Cemetery under the direction of Carmichael-Whatley Funeral Directors of Canadian.

Eddie was born October 10, 1928 to Ardell and Hollis George. Eddie married the love of his life, Helen Halpain on June 17, 1956 in Perryton. Eddie and Helen made a home and raised a family on the George homeplace for almost 49 years. They were inseparable, working side by side moving irrigation pipe, working cattle, planting and harvesting crops, and shared a love for their horses until Helen’s death in 2005. Eddie was a farmer, rancher, and raised Thoroughbred horses. He raised colts that have won races in Texas, Oklahoma, Michigan, Ohio, Nebraska, Louisiana, and Canada. Eddie was a devoted husband, father, and “Gran Gran”. He rarely missed family gatherings, birthdays, and special events; often driving over 4 hours to attend his great grandchildren’s birthdays up until his death. Eddie was a longtime member of the Shamrock Masonic Lodge #929 AF &AM, receiving his 70-year pin on November 19, 2021. He also served as the Master of Wheeler Lodge from 1966-1967.

He was preceded in death by his parents; his wife, Helen; grandson, Michael George; twin great granddaughters, Kadence and Kambria Cox.

The family will receive friends at the funeral home on Tuesday, from 6:00-7:30 PM.

To order memorial trees or send flowers to the family in memory of William Edward "Eddie" George, please visit our flower store.