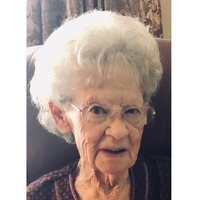 Wilma Laubhan, 87, of Amarillo and formerly of Lipscomb, passed away on June 30, 2021 in Amarillo.

Services will be 1:00 PM Friday, July 9, 2021 at Carmichael-Whatley Canadian Chapel with, Rev. Scott Richards, pastor of Booker United Methodist Church, officiating. Burial will follow in Lipscomb Cemetery under the direction of Carmichael-Whatley Funeral Directors of Canadian.

Wilma was born March 2, 1934 in Des Moines, New Mexico to Lincoln and Ione Booth. She was raised in Lipscomb County and attended school in Higgins. She married Linden Roy Laubhan on June 7, 1952 in Higgins and he passed away on March 17, 2005 after 52 years of marriage. She enjoyed doing cross stich, working in the garden, fishing, and all kinds of arts and crafts. Wilma loved to cook, she could find a recipe and add her touch to it and always made it better. She moved to Amarillo in 2008 and was a lifelong Methodist.

She was preceded in death by her parents; a sister, Carolea Summers; a brother, Gene Booth; a son, Ricky Laubhan; daughter-in-law, Brenda Laubhan; and grandson, Eric Snyder.

The family will receive friends at the funeral home on Wednesday and Thursday from 6:30 PM to 8:00 PM.

To order memorial trees or send flowers to the family in memory of Wilma Laubhan, please visit our flower store.